About six thousand years ago, the first pearl was discovered by fishermen who came across a pearl that was washed ashore.  The most amazing stories came to life. The Persians thought they were tears of the Gods. According to the Chinese, they were made by the power of the moonlight. The Greeks had a theory about lightning and the Romans believed that when Venus, the goddess of love, arose from a shell in the sea, the drops that fell off her skin were transformed into pearls.

The truth is a lot less poetic but none the less miraculous.
An oyster is peacefully living in its shell when suddenly a small piece of dirt penetrates like a small crab or a parasite. To protect itself from this invader, the oyster starts wrapping the little piece. The oyster covers it layer by layer with a tough and durable material we know as mother-of-pearl.  Four years later it has become a beautiful round brilliant ball-shaped object: a pearl.  A well-hidden jewel therefore, resting on the bottom of the sea.

It takes 15.000(!) oysters to find only one pearl. Needless to say 'wild' pearls are very precious. For centuries they were only worn by the richest people on earth like Cleopatra and later by Kings and Maharajas. It wasn’t until the 1920s that Japanese Mikimoto found out how to cultivate them.

By injecting a small piece of oyster tissue into the shell, the oyster starts its marvellous 'pearl protection' process. This ended the need to search for pearls and they have been cultivated in large quantities ever since - in salt water (Akaya and Tahiti-pearls) as well as in fresh water (in huge lakes in China). But as pollution in the world’s seas is getting worse and worse, salt water pearls are becoming very hard to cultivate and therefore more expensive.

Nowadays, fresh water pearls are affordable for everyone, but it hasn’t always been like that. There was a time when 'fake' pearls were absolutely 'not done'. However, thanks to the cocksure Coco Chanel, they became a hit after all. She introduced pearl necklaces of more than one-meter in length into her designs, which was only possible (considering the cost) with cultured pearls. 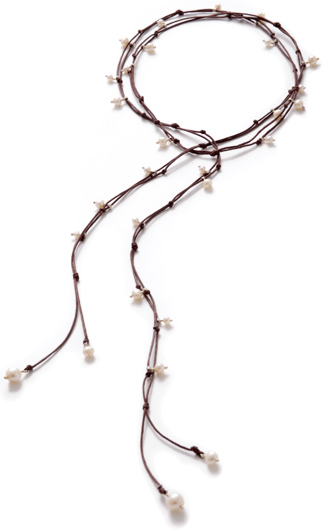